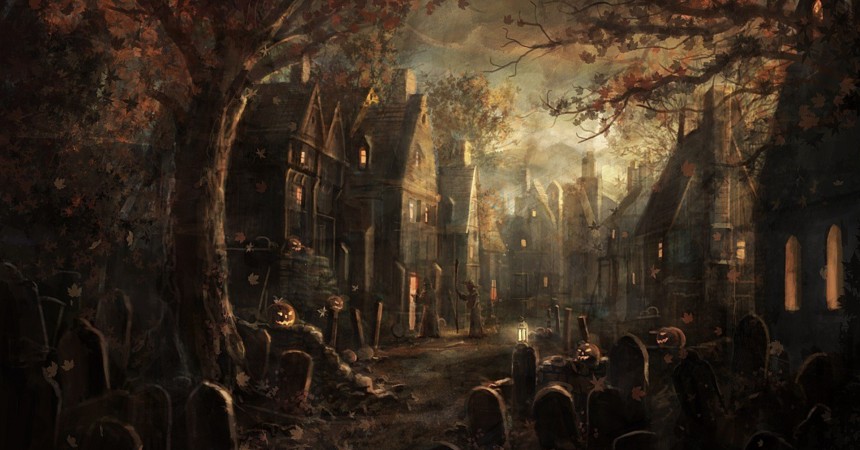 Samhain, (pronounced SOW-in, SAH-vin, or SAM-hayne) means “End of Summer”, and is the third and final Harvest. The dark winter half of the year commences on this Sabbat.

It is generally celebrated on October 31st, but some traditions prefer November 1st. It is one of the two “spirit-nights” each year, the other being Beltane. It is a magical interval when the mundane laws of time and space are temporarily suspended, and the Thin Veil between the worlds is lifted. Communicating with ancestors and departed loved ones is easy at this time, for they journey through this world on their way to the Summerlands. It is a time to study the Dark Mysteries and honor the Dark Mother and the Dark Father, symbolized by the Crone and her aged Consort.

Originally the “Feast of the Dead” was celebrated in Celtic countries by leaving food offerings on altars and doorsteps for the “wandering dead”. Today a lot of practitioners still carry out that tradition. Single candles were lit and left in a window to help guide the spirits of ancestors and loved ones home. Extra chairs were set to the table and around the hearth for the unseen guest. Apples were buried along roadsides and paths for spirits who were lost or had no descendants to provide for them. Turnips were hollowed out and carved to look like protective spirits, for this was a night of magic and chaos. The Wee Folke became very active, pulling pranks on unsuspecting humans. Traveling after dark was was not advised. People dressed in white (like ghosts), wore disguises made of straw, or dressed as the opposite gender in order to fool the Nature spirits.

This was the time that the cattle and other livestock were slaughtered for eating in the ensuing winter months. Any crops still in the field on Samhain were considered taboo, and left as offerings to the Nature spirits. Bonfires were built, (originally called bone-fires, for after feasting, the bones were thrown in the fire as offerings for healthy and plentiful livestock in the New Year) and stones were marked with people’s names. Then they were thrown into the fire, to be retrieved in the morning. The condition of the retrieved stone foretold of that person’s fortune in the coming year. Hearth fires were also lit from the village bonfire to ensure unity, and the ashes were spread over the harvested fields to protect and bless the land.

Various other names for this Greater Sabbat are Third Harvest, Samana, Day of the Dead, Old Hallowmas (Scottish/Celtic), Vigil of Saman, Shadowfest (Strega), and Samhuinn. Also known as All Hallow’s Eve, (that day actually falls on November 7th), and Martinmas (that is celebrated November 11th), Samhain is now generally considered the Witch’s New Year.

Stones of Samhain:
All Black Stones, preferably jet or obsidian.