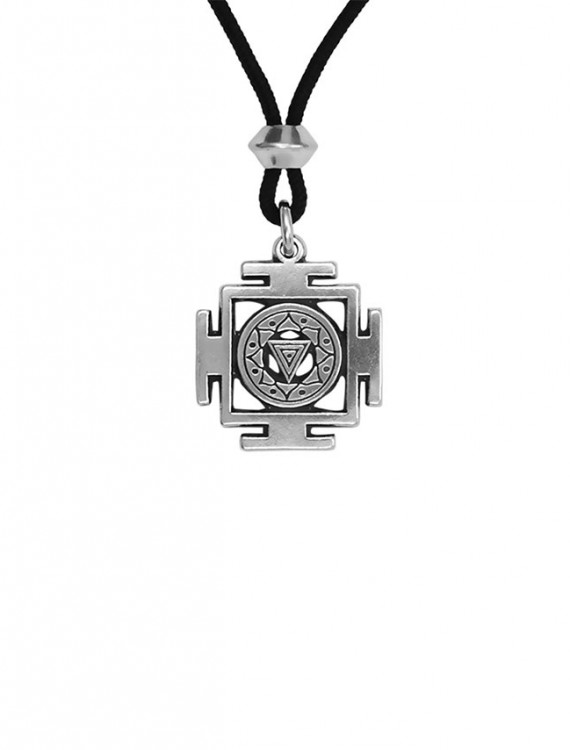 The Hindu Goddess Kali, is known as the goddess of time and change. She represents the power of transformation that occurs with the destruction of the ego. She is the essence of Divine Love to which we surrender, when we begin our journey toward healing and spiritual growth. Although the Goddess Kali is a fearful sight, with skin totally black, four arms, a protruding tongue, and a girdle of human skulls, she is in truth the Divine Mother. She battles the demons of false consciousness and frees us from the illusion of form. Transcendence to pure love is then possible.

The Kali Yantra is a symbol combining the transformative energies of Kali, within the “Yantra”, a geometric symbol used to focus the mind. Drawing, wearing, or concentrating on this symbol is said to have both spiritual and Magickal Power. At the center is a small dot, the bindu, point of creation. It also represents Kali, as Shakti, the activating energy of creation. Surrounding the Bindu are five concentric triangles that represent the five Koshas.

The koshas are the sheaths of the human condition. The physical sheath is known as, the Annamayakosa ; the life force is the Pranamayakosa; Manomayakosa is the mental/emotional sheath; Vijnanmayakosa is wisdom; and Anandamayakosa is Bliss The two circles are symbols of life and death. The Lotus blossom symbolizes the eight chakras and the eight principles of Prakriti; the manifesting universe; earth, air, water, fire, ether, manas Lower mind), buddhi (higher mind), and ahamkara (ego).

The Kali Yantra is a meditative tool used to focus the mind on spiritual growth and union with the Divine.