$0.00 0 items
Back to Ancient SymbolsGoddess 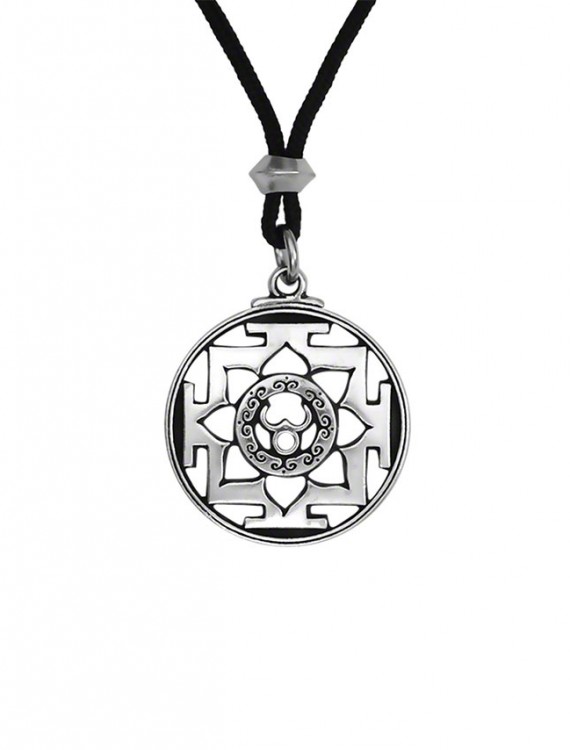 Navigating through the feminine psyche can be a dark, mystical, and sometimes frightening experience. The mystery of the Goddess, the ageless enigma of the female nature, lies within the soul of every woman. We need only concentrate to tap into this awesome power and connect with the timeless energy of the Goddess herself The “Trisula Yantra” is a complex mandalda and can be your guide on a spiritual journey to the inner self, renewed with the magic of the Great Mother. Isis, Ishtar, Kali, Gaia, Danae, in her many forms, she can provide peace, nurturance, and guidance to the sometimes fragile female spirit. The geometric shape is the yantra, used to help focus during meditation.

It represents the four primal rivers. The eight-petaled lotus is a symbol of the loving, nurturing aspect of the Goddess. The lotus is know as the flower of life; rooted in the earth, surrounded by water, releasing it’s perfume to the air, and fertile from being fired by the sun. The circle at the center of the lotus is one of the primary feminine signs. The circle surrounds the consecrated space, it is the center of the mother land, and the space where all are looked upon as equal. The spiral shapes surrounding the inner circle are symbolic of life and death and represent the womb of the earth. Each dot represents a new spark of life, like the, “bindu” in Hindu tradition. Finally, at the center is the “Trisula”. The Trisula is a symbol of great mystery and importance in India. Worshippers of Buddha say it is their deity’s monogram and a symbol of the dharma (law). Some call it “The Flame in the Lotus”, or the sun surmounted by two moons. Some say it represents the “Triple Moon Goddess” as maid mother and crone. It also resembles the breasts and belly of a woman, depicting the life-giving force of the female nature. The “Trisula Yantra” can awaken the Goddess in you! Let it touch your soul and renew the spirit that is woman.

“Myths can be seen as eternal truths that challenge and expand our imagination. A symbol is a mediator of wisdom; it conveys more than the eye perceives.”