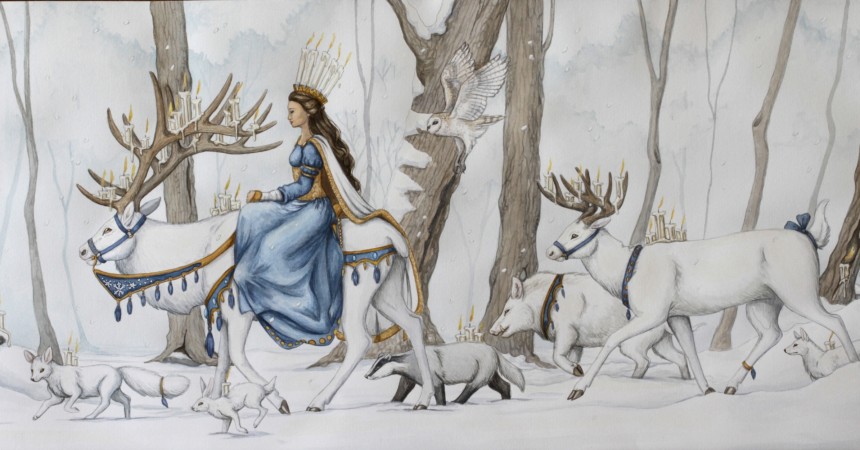 As with all Old Tradition observances, this holiday is usually celebrated beginning at sundown on February 1 and continuing through the day of February 2. Imbolc means in the belly of the Mother because that is where seeds are beginning to stir as it is Spring.

Another name for this holiday is Oimelc, meaning milk of ewes since it is also the traditional lambing season in the old world.  Herd animals have either given birth to the first offspring of the year or their wombs are swollen and the milk of life is flowing into their teats and udders. It is the time of Blessing of the seeds and consecration of agricultural tools. It marks the center point of the dark half of the year.

This holiday is especially sacred to the Celtic Fire Goddess, Brigit, patron of smithcraft, healing, midwifery, and poetry.  It is the festival of the Maiden, for from this day to March 21st, it is her season to prepare for growth and renewal.   The Maiden is honored, as the Bride, on this Sabbat. Straw Brideo’gas (corn dollies) are created from oat or wheat straw and placed in baskets with white flower bedding. Young girls then carry the Brideo’gas door to door, and gifts are bestowed upon the image from each household. Afterwards at the traditional feast, the older women make special acorn wands for the dollies to hold, and in the morning the ashes in the hearth are examined to see if the magic wands left marks as a good omen. Brighid’s Crosses are fashioned from wheat stalks and exchanged as symbols of protection and prosperity in the coming year. Home hearth fires are put out and re-lit, and a besom is place by the front door to symbolize sweeping out the old and welcoming the new. Candles are lit and placed in each room of the house to honor the re-birth of the Sun.

A Covens High Priestess may wear a crown of lights (candles) to symbolize the return of the Goddess to her Maiden aspect, just as the Sun God has reached puberty.  Brighid’s snake emerges from the womb of the Earth Mother to test the weather, (the origin of Ground Hog Day), and in many places the first Crocus flowers began to spring forth from the frozen earth.

The Christian religion adopted a number of these themes, as follows: February 1 became St. Brigit’s Day, and February 2 became Candlemas, the day to make and bless candles for the liturgical year. The ‘Feast of the Purification of the Blessed Virgin Mary ‘ adapts the Maiden Goddess theme. The alternative date of February 14 Old Candlemas, Christianized as Valentine’s Day is employed by some Covens.

Symbolism of Imbolc:
Purity, Growth and Re-Newal, The Re-Union of the Goddess and the God, Fertility, and dispensing of the old and making way for the new.

Activities of Imbolc:
Candle Lighting (light Candles or lamps in each room of the house right after sunset for a few minutes to honor the Sun’s rebirth), Stone Gatherings, Snow Hiking and Searching for Signs of Spring, Making of Brideo’gas and Bride’s Beds, Making Priapic Wands, Decorating Ploughs, Feasting, and Bon Fires maybe lit.